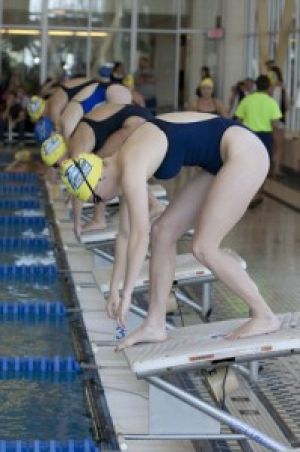 The Eagles finished third out of the 13 teams participating in the event.

GSU swam into fourth place on the first day of the championships.

On the second day of competition, the Eagles moved to third place and defended their well-earned position until the end of the event.

On the opening day of the event, the Eagles broke a school record, set 11 new personal bests and placed five individuals in the finals.

Meisenhelder earned a podium spot for her one-meter dive performance, placing third with a score of 257.15 points.

The Eagles earned one more podium spot when the 400-meter medley relay team consisting of freshman Christina Moran, Lavallin, sophomore Megan Heller and Lanson claimed bronze in the last event of the day.

On the second day of the championships, the Eagles broke four school records and had four athletes qualify for the finals.

The day’s best performance came from the 200-meter medley relay team made up of freshman Christina Moran and sophomores Heller, Lavallin and Lanson.

Parsons continued her strong performance at her career first championships.

Lanson finished out a dominating performance by the Eagles’ sophomore class, finishing seventh in the 100-meter backstroke finals, tying her new personal record of 56.06 that was set at the championship meet.

Another school record was broken as sophomore Sarah Schwartz finished 11th in the 100-meter butterfly and qualified for the consolation finals in the evening session.

Mullican and Juncker raced neck-and-neck in the 400 IM consolations. Mullican finished first with a career best mark of 4:27.75 and Juncker came in right behind her with a time of 4:28.59.

The Eagles placed an athlete in every event final, broke one school record, accumulated 11 more personal bests and earned four podium spots on the last day of the weekend-long event.

Parsons finished out her strong first championships appearance by earning another podium spot, her third in three days.

Meisenhelder finished second with a score of 272.00 after qualifying as the number eight seed, and freshman Emma Weisel qualified for her first career finals, earning a bronze and setting a new personal best of 268.00.