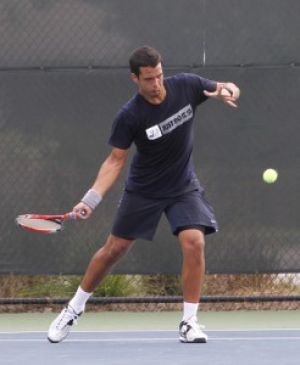 The Georgia Southern University Eagles lost their home opener 4-3 against the University of Central Florida Knights.

Two out of the three doubles teams won their matches against the Knights. The number two doubles team of senior Matthijs Verdam and junior Oliver Webb started off doubles play by winning 8-5.

It was soon followed with an 8-6 win by the No. one doubles team of freshman Rayane Djouad and junior Marco Osorio.

The only loss by GSU in the doubles match came from their No. three doubles team of sophomore Daniel Rush and redshirt freshman Carson Jones, losing 1-8.

During singles play, adversity stuck the Eagles after Djouad, GSU’s No. two singles, began play with a 1-6, 3-6 loss. The Eagles No. four singles player, Webb, gave the Eagles hope after a 6-3, 6-2 win, bringing the singles match to a 1-1 tie.

The Knights responded with their second singles win of the day after they defeated the No. five singles player, Jones, 6-0, 6-1. The Eagles evened the score after a comeback win by the No. three singles player, sophomore Albert Codina Sala. Sala beat his opponent 1-6, 6-1, 6-1.

A 3-6, 1-6 loss by No. six singles player Osorio, set up a thrilling three set match with GSU’s No. one singles player, Verdam. This match decided who won. Verdam went on to lose the match 6-4, 5-7, 3-6 in a heartbreaking fashion.

Despite the loss the players remained positive for the upcoming matches.

“Obviously it’s a tough loss, because it’s a tight match, but I think that the they way we’re going to deal with adversity is taking the things that we can improve after this loss and try to make them better day after day at practice and try to overcome this situation,” Sala said.

“I mean obviously it’s tough, tough to lose the last match, but we can come back out this week and give a lot more effort. We’re going to be there more hours and just keep fighting hard,” Webb said.

Discipline will be the hot topic again next week as the Eagles start conference play.

“It’s starts big with conference next weekend so we need to stay focused on the same things about being discipline in between every single point and going back to do the same thing over and over again,” Zieziula said.

The Eagles fall to 3-3 on the season and open conference play against Wofford College at the Hanner Tennis Complex this Saturday.

The match on Friday against East Carolina University was canceled due to wet courts and inclement weather.