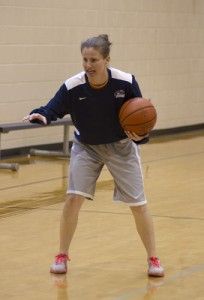 Before coming to GSU, Vozab was raised by two basketball coaches and played ball herself.

“My dad was a high school coach for a lot of years, and both my parents have been AAU coaches.  I was just around the game from a really young age.  I remember being a 2-year-old at my dad’s high school games, and being five or six at all his practices,” Vozab said.

Being raised by a coach, Vozab loved being in charge of where everyone was on the floor.  It is what made her into a very solid point guard at Providence College where she started all four years and was named team MVP her freshman year.

Vozab was always a strong leader and her teammates agreed as she was voted team captain for her sophomore, junior and senior seasons.  As team captain she led her team into battle against Big East conference foe and national power house University of Connecticut.

Vozab matched up against and played with one of the greatest female basketball players of all time in former UConn stand out and current Seattle Storm point guard Sue Bird.

Vozab patterned her game after her favorite NBA player Scott Skiles, who as point guard for the Orlando Magic recorded the most assists ever in one game with 30.

“When I was a little kid in like third grade I wrote him a letter and he wrote back to me.  I was shocked. He was in the NBA at that time, and he was like ‘you have to play with guys if you want to be good,’” Vozab said.

Using her background, Vozab has brought a different approach to coaching the women’s team.

The team has only managed a 2-14 record, but that is not indicative of how hard the team has played. Her first season here has been a learning process.

Vozab said, “I think it’s a process, and I know that we are getting better.  There have been a couple of opportunities where we felt we had a chance to finish the deal, and we didn’t.  Obviously that’s disappointing when it happens, but it’s also something we learn from.”