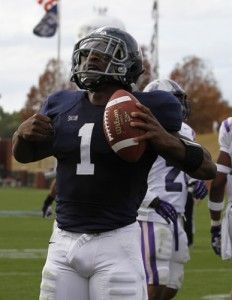 Photo by: Lindsay HartmannJunior quarterback Jerrick McKinnon (1) celebrates after a touchdown in the game against Central Arkansas. McKinnon was named MVP for this season of GSU football.

McKinnon finished third in school history in rushing yards with 1,817 yards and 20 touchdowns this season, while Stevenson was the first Eagle since 2010 to total over 100 tackles and rounded out the season with 103 stops.