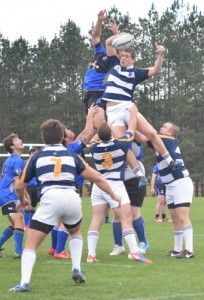 “Overall, they did really well,” head coach Joe Moore said. “Some of the fundamentals weren’t there. Realistically we should have won that game, but it comes down to the fundamentals, and they did not do those well.”

Michael Dixon, a senior justice studies major and captain of the team, was also very proud of the team’s performance.

“It was definitely a game that showed us what we need to work on, what we need to improve and what we’re doing good on,” Dixon said. “It was a close game. To lose by two is really tough. Other than that, I was real proud of everybody. Everybody had a lot of heart and a lot of intensity. There was a little bit of sloppy play here and there, but other than that I was real happy with today.”

Securing the ball and set pieces were some of the biggest mistakes that came from Saturday’s matchup.

“We lost a lot of scrums,” Moore said. “And with losing the scrums, you’re going to lose the game.”

Another mistake for the team was execution.

“We didn’t execute like a team,” John Lee, junior international studies major said. “We didn’t work together that well, we didn’t communicate.”

After last year’s game against MTSU, the Eagles were expecting an easy win.

“We blew them out last year, and we expected to do the same thing,” Lee said. “We got a little cocky; we didn’t work together as a team, as a unit like I said. We just tried to do everything on our own.”

The Eagles have a bye next week, then travel to Marietta, Ga to face Life University the following week.