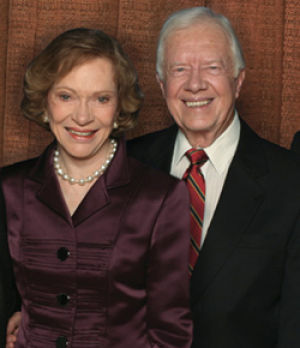 Tickets for “An Evening with the Carters,” featuring 39th President Jimmy Carter and former First Lady Rosalynn Carter, became available to students yesterday through the Office of Student Leadership and Civic Engagement.

The former president and first lady will speak on Feb. 12 at Hanner Fieldhouse.

Tickets for “An Evening with the Carters” are currently available for students at the Office of Leadership and Civic Engagement, but with the anticipation of a packed out Hanner Fieldhouse, students are limited to one ticket per Eagle I.D.

“We are expecting a packed house. I think we can seat about 4,700 people, and that is the plan,” Jodi Kennedy, associate director of the Office of Student Leadership and Civic Engagement, said.

“Not only is he the former president of the United States, but he is from Georgia. So I think it is really special to have the chance to share him with our students and the community,” Kennedy said.

Tickets for faculty and staff will be available from Jan. 31 to Feb. 6 in the Office of Student Leadership and Civic Engagement, and the Statesboro community tickets will be available Feb. 5 and 6 at the Hanner Fieldhouse box office or at the GSU City Campus.

Inviting President Carter to GSU’s campus has been in the works for a couple of years through the collaborative efforts of a group of faculty in a learning community on peace studies, Kennedy said.

“An Evening with The Carters” is a part of the annual leadership lecture series that the OSLCE hosts during a time in both fall and spring semester.

“This is the same series that brought speakers like Condoleeza Rice, Rudy Giuliani and Madeleine Albright to campus,” Kennedy said.

As the Carters exemplify the essence of leadership, students and the community can expect to be motivated and moved by the former president’s story to be a leader through any situation in your community and beyond, Kennedy said.

Kennedy said, “They can expect to learn a lot about leadership, learn a lot about what it means to be a responsible part of your community and how they as individuals can give back to causes they are passionate about. I think the Carters are such great examples of how we can dedicate our lives to something bigger than ourselves.”