Meisenhelder named Diver of the Week 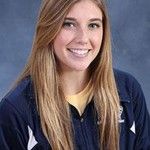 Meisenhelder qualified for the NCAA Zone Diving Championships after a pool and school record-breaking one-meter dive on Saturday. This is the second time that Meisenhelder has qualified for this event. The first time she qualified was last year, making her the first diver in GSU’s history to do so.

This is Meisenhelder’s first Diver of the Week honor this season and the third of her career. She was also named CCSA Diver of the Year in 2012.

Meisenhelder will join the Eagles as they dive back in against University of North Carolina at Asheville Saturday at home for the Eagles’ last home meet of the season at 1:00 p.m. This meet will also serve as Senior Day.