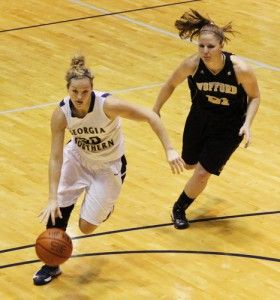 The Georgia Southern University women’s basketball team will be looking to get a winning streak going Saturday at the expense of the University of North Carolina at Greensboro Spartans.

GSU will be riding a wave of confidence after a dramatic 61-58 home win over the Wofford College Terriers.

In that game, the Eagles tied a season low with 11 turnovers.  Freshman point guard Alexis Sams played all but one minute of the game and had only three turnovers.

“Definitely something that we talked about was taking care of the ball and valuing the possession,” head coach Chris Vozab said.

Taking care of the ball could be especially difficult because UNCG averages 11 steals per game.  That is good enough for second place in the Southern Conference.

GSU is going to have to put the clamps on UNCG freshman guard Lucy Mason.  Her 15 points per game leads the team and ranks fourth in the SoCon.

The teams split last year’s meetings 1-1 with both teams protecting home court.  GSU came one point away from stealing the game in North Carolina.

UNCG is one of two teams yet to win a SoCon game.  GSU is coming off of a win over the other winless team, which could be a good sign for the Eagles.

GSU had one of its better shooting performances on Sunday shooting 42 percent from the field.  The offensive momentum could come in handy as UNCG allows the most points per game in the SoCon at 70.

UNCG’s aggressive style of defense earns the team a lot of steals, but it can also lead to a lot of fouls being called.  If the referees blow a quick whistle, GSU might benefit.

Junior guard Mimi DuBose and senior guard Meredyth Frye rank fifth and ninth in the SoCon when it comes to making free throws.