Eagles can still finish at the top in the SoCon 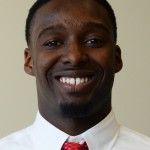 Holloway is a junior journalism major from Macon.

The Eagles currently have an overall record of 8-11 with a conference record of 2-4, which puts them in third place in the division.

Head coach Charlton Young and his team are traveling down an all too familiar road. As of Jan. 23 last year, the Eagles had a record of 8-11.

GSU would go on to win six of its last nine games to obtain the No. 3 seed in the SoCon tournament before losing to Elon University in the second round of the tournament, finishing the season with a record of 15-15.

With 12 games left, all coming against members of the SoCon, the Eagles are in position to take control of the South Division.

Winning the division will not be an easy task for the Eagles. Seven of GSU’s last 12 games are on the road.

The Eagles still have to play Furman University twice. Furman has a 1-4 conference record.

GSU will also get two awaited rematches with The Citadel and Wofford College at a combined conference record of 2-11, both teams’ only conference wins coming against the Eagles.

GSU will also get rematches against two teams it has already beaten this past week: Davidson College and the College of Charleston.

Two games also come against Western Carolina University, which has the second best conference record in the North Division of the SoCon at 5-2.

The next game for the Eagles is Thursday on the road at Appalachian State University at 7 p.m.