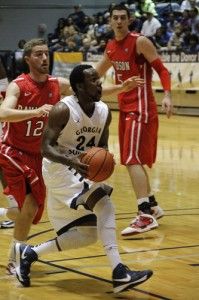 Photo by: Chad KenneySenior guard C.J. Reed (24) prepares to score a goal in the game against Davidson. GSU won the game 70-57.

GSU had point contribution from the majority of their players in the second half, and, leading the way, was senior guard C.J. Reed with 12 points and 3 assists. The Eagles were more aggressive during the beginning of the first half having committed more fouls than the Wildcats. But, the persistence the Eagles showed continued throughout the entire game.

Not only did the Eagles maintain the lead in the second half, but also junior forward Marvin Baynham made two incredible plays in a gain of four points for the Eagles and uproar from a large crowd of 1,716 fans. With five minutes left to go in the half, the Eagles showed no mercy to the Wildcats and took an 11 point lead with a 15-4 run.

The Eagles kept pushing through in the last five minutes and Baynham and junior forward Eric Ferguson made slam-dunks that made the whole crowd stand on their feet and begin to shake their car keys at the opposing team and fans.

The Eagles brought a victory home for GSU, but also had many accomplishments recognized as well. Ferguson was given a token basketball for reaching 1,000 career points. Also, scholar athletes from both male and female fall sports were acknowledged for their academic achievements.

GSU will play at home two more times this week against College of Charleston on Thursday at 7 p.m. and against The Citadel on Saturday at 7 p.m.