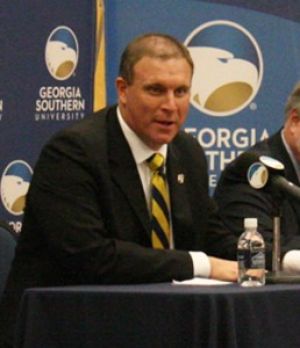 Georgia Southern University’s new Athletic Director Thomas Kleinlein is on a mission to elevate GSU athletics to new heights in the national spotlight.

Although Kleinlein has only been a part of Eagle Nation for about a month, he clearly understands the vision President Brooks Keel has for GSU athletics.

“What we’re trying to do here in our athletic department is bring as much national exposure as we can to the university, and we are going to do that through what we do on our fields, in our arenas, and at the events we play in,” Kleinlein said.

Kleinlein wanted to be clear that he doesn’t plan on putting the other sports at GSU on the back burner.

“I think when you look at an athletic department there are clearly leaders and drivers of an athletic department.  Those are usually your higher profile, more revenue-generating sports, but those function in a way that their job is to drive the whole department and bring notoriety to everybody else and what they’re doing,” Kleinlein said.

The Eagles have officially passed the vote to support stepping up the competition to the Football Bowl Subdivision and Kleinlein knows the Eagle Nation can only benefit from the leap of faith.

“The movement that we’re getting ready to start to try to push us towards FBS football is an important movement because it now puts our university on a different platform and puts us in a different light with some different people,” Kleinlein said.

GSU athletics doesn’t get the same national recognition as some universities in Georgia, but Kleinlein said that talent or coaching is not the issue.

“We have some of the most talented kids in the United States of America that are playing for us, and I would stack our coaching staff up in all of our sports, not just football, against anybody.  At the end of the day it comes down to the ability to produce and drive revenue and resources into your program,” Kleinlein said.

Kleinlein has been in talks with several different conferences and he wants to find the best possible fit for the Eagles.