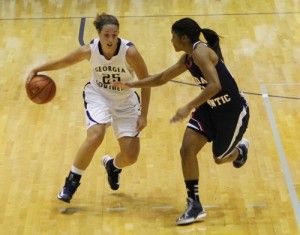 Photo by: Tasha LundSenior guard Meredyth Frye (25) dribbled around a Florida Atlantic University defender in the opening game of the season. Since then the Eagles have brought their record to 2-14.

These two squads are two very evenly matched teams. The keys to this matchup will likely come down to home court advantage and turnovers. The Eagles’ only wins this season have both come at home. But beyond the numbers, GSU has undoubtedly played closer, more complete games at home than on the road this year.

And from a turnover standpoint, GSU and Wofford are both averaging right around 20 turnovers per game. So look for the defense that forces the most mistakes and turnovers to come out of Sunday’s contest with a win.

But in addition to those two key situations, another deciding factor will be which team rebounds more efficiently. The Terriers average 37 rebounds per game to 36 for the Eagles. Head Coach Chris Vozab will be seeking to exploit the size advantage that 6’3” junior center Danielle Spencer gives GSU over Wofford’s tallest defender, 6’0” sophomore center Michelle Merritt. If the Eagles come down with more rebounds, especially offensively, that will put the team on the fast track to its third win of the season.

Multiple common opponents such as Davidson College, University of Tennessee at Chattanooga and Samford University have beaten both GSU and Wofford. Wofford beat Kennesaw State, which defeated GSU. GSU beat Western Carolina University, which defeated Wofford. The similarities between these two teams are too much to measure. The only way to receive an accurate measurement is to be at Hanner Fieldhouse on Sunday to see which team will out-duel the other.

GSU has the home court advantage, neither team has proven to have an advantage based upon turnover margin, and GSU has the size advantage.

My prediction: GSU out-rebounds the Terriers and takes the victory, 56-46.