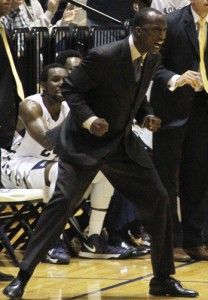 The Georgia Southern University men’s and women’s basketball teams will host an Alumni Day on Saturday at Hanner Fieldhouse.

The women’s team tips off against Southern Conference preseason favorite Davidson College at 5 p.m., and right after that the men’s team will host the University of Tennessee at Chattanooga at 7:30 p.m.

Purchasing a ticket to the women’s game will also grant access to the men’s game, and a commemorative poster featuring GSU basketball alumni will be given out at the door.

Each of the teams has invited its Eagle alumni back on campus for the game day and will introduce and recognize them during halftime of each game.

GSU women’s basketball Hall of Fame members, Phylette Blake, Regina Days-Bryan and Sharon Mitchell-Coleman are all scheduled to be back on campus for the event.

The men’s team is coming off of a 72-66 win at Western Carolina University Saturday and will travel to Furman University today at 7 p.m. The Eagle women’s team have won two of their last three games and play seven of their final 10 regular-season games at home in Hanner Fieldhouse.