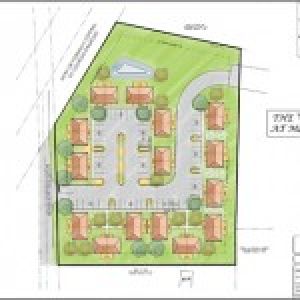 Next month, Hendley Properties will begin construction for 43 units that will be divided into two new residential complexes located in downtown Statesboro.

There will be a total of 51 new bedrooms downtown, Davis said.

“The ultimate goal is to start buying properties downtown and we want to have pocket communities that we can create many villages and have people like students and professors start moving towards the downtown environment,” Davis said.

“The key word is low density. A lot of people are getting tired of the big boxed community and they want to live somewhere where they can park outside their front door, walk straight in their apartment, and that’s what the village concept will offer you. You’ll never have to park like six or seven buildings away,” Davis said.

Downtown Statesboro has struggled to get businesses that attract students, and Hendley Properties hopes that by developing residences for students downtown, new businesses will also come, Davis said.

“There will kind of be a mutual benefit for students and for property management. We’re hoping just to bring new clientele to downtown that hasn’t been there previously,” Davis said.

The rent for the apartments is not all-inclusive, and it is left to the resident to connect water and electricity and to pick cable and Internet providers, Davis said.

“But  (the residents) are eligible to use any of the four Hendley property pools,” Davis said.

Hendley Properties has decided to only build one and two bedroom units, but plans on deciding, at a later date, if it can make that number larger as far as unit size, Davis said.

Move-in for Magnolia Village is set to begin the first of May, and move-in for Village at Midtown will have four dates, the first being in May and the last in August, Davis said.

“Magnolia Village is right next to the walking track in downtown Statesboro so one of the cool things is that someone might like to exercise like jog or bike. It’ll be right outside their back door,” Davis said.

The Village at Midtown was made possible by a collaboration of three groups.

Davis said, “It was kind of like combination effort with the City of Statesboro, the Downtown Development Authority and Hendley Properties, all three working together to bring the Village at Midtown, three groups coming together to make that one project happen.”