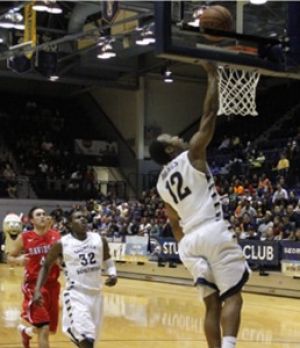 The Georgia Southern University men’s basketball team is struggling at 7-10, and the schedule is not getting any easier with a matchup against the College of Charleston and its 12-5 record.

On paper, the Eagles’ and the Cougars’ matchup looks to be mostly even as they are almost identical in many categories.

Rebounding is the only category in which the Cougars have a significant advantage over the Eagles as the Cougars average 36.9 rebounds compared to 30.7 rebounds for GSU.

The Eagles average a better free throw percentage, more steals and fewer turnovers than the Cougars.

Other than Stitt and Lawrence, the Cougars have four players who average at least seven points per game.

Despite their record, the Cougars average more turnovers than GSU, which has struggled with turnovers throughout the season.

The Cougars have played well defensively, only allowing their opponents to shoot 41.1 percent from the field and 30 percent from downtown.

The Eagles have yet to win a game in the conference at 0-3 and look to change that on Thursday night at 7 at Hanner Fieldhouse when they take on the Cougars.