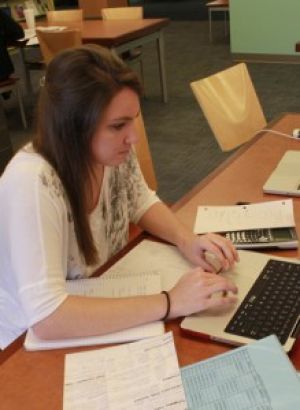 Zach S. Henderson Library begins to look more like its nickname, “Club Henderson,” at this time of year with students crowding computers and staying up late to cram for finals.

“I know over the weekend it will look like a mall in here,” Lorenzo Bryson, sophomore political science major, said.

Before hitting the books this weekend, students should know there are more options than Club Hendy for optimum studying this finals season.

Michael Nielsen, professor and chair of the psychology department, suggests studying in the environment where the finals test will take place.

“Research shows that as you are in that environment, hearing familiar sounds and looking around can prompt you with cues to answers,” Nielsen said.

“I study in the library in a quiet place or by myself,” Michael Rosel, junior mechanical engineering major, said.

If it’s possible, try to study in the classroom or inside the building, Nielsen said.

Those who are serious study in the upper levels of the library on the third and fourth floors, Michael Walen, senior graphic design major and library employee, said.

“I think people come study in the library because it symbolizes the place of knowledge, and there is an unspoken rule about being quiet,” Walen said.

Other places on campus offer environments for studying that may be overlooked while students search for a place to study in the more crowded places.

“It’s quiet in the IT Building sometimes, and I think the Williams Center is a good place for groups to study,” Rosel said.

Nielsen said, make a change this finals season and study somewhere that will seem familiar during the exam.