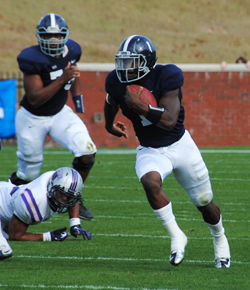 Photo by: Lindsay HartmannJunior quarterback Jerick McKinnon takes the ball and runs for one of his two rushing touchdowns in the 24-16 FCS playoff victory against the University of Central Arkansas on Saturday.

As the final quarter of play began the Eagles had the ball and started to string together a pair of first downs to move them into UCA territory. The drive stalled after an illegal forward pass was called against the Eagles resulting in a loss of downs, followed by an incomplete pass caused the punt team to come out.

UCA took over at their own 20 yard line, and completed a 31 yard pass to bring the ball to midfield. The Eagles defense forced a 3rd and 5, and held after Smothers overthrew his wide receiver. The Bears decided to go for it on 4th and 5 and were unsuccessful once again as Smothers could not complete his pass.

GSU gained possession at their own 44 yard line and were not able to do much going three and out, and gaining five yards before punting the ball away to the UCA 13 yard line.

On third and nine at his own 14 yard line Smothers found his wide receiver for a completition of 36 yards to bring the ball to the 50. Once again the Bears faced a third and long, this time they could not convert. The Bears lined up on 4th and 1 but we’re flagged for false start, bringing the punt team out and pinning GSU at their own 12 yard line with 6:27 seconds left in the game.

After taking over GSU began to eat away the clock by slowly moving down field and grinding away at the Bears defense. On this drive Jerick McKinnon eclipsed the 300 yard rush mark on the day. Punter Luke Cherry punted the ball down to UCA’s 6 yard line after coming on in a 4th and 3 situation.

UCA caught a break when one of their wide receivers was interfered with, giving the Bears 15 yards and a first down. The drive came to a complete hault when GSU recovered a fumble at the UCA 36 yard line.

After the break GSU came out and Jerick McKinnon busted a 24 yard run to start the second half and the GSU drive. The drive ended with McKinnon’s pass being intercepted at the UCA five yard line and reutrned to the fourty.

Following the turnover UCA methodically began to move the ball down the with an array of quick passes and runs up the middle. UCA scored their first touchdown of the day after a seven play, 59 yard drive was ended by a 19 yard touchdown by Jackie Hinton to put the Bears down 24-16.

McKinnon once again showed his big play ability with a 52 yard run down the left side of the field before being pushed out of bounds at the CAU 24 yard line. Darreion Robinson brought the Eagles inside the five yard line with a 12 yard rush on third and three. GSU was stopped on it’s next three plays and forcing the Eagles to kick a 27 yard field goal that went wide left.

UCA took over at their own 20 yard line after the missed field goal. Dion Dubose recorded a sack that lost 4 yards and put UCA in a hole. The Eagles held the Bears on 3rd and 14, and UCA punted to GSU.

At the end of the third quarter the Eagles still lead by a score of 24-16.

McKinnon opened the second quarter with a 51 yard run up the right side of the field until he was tackled at the UCA 6 yard line. Two plays later he capped the drive off with a six yard touchdown run to put the Eagles up 21-6.

UCA began to put together a drive and drove deep into Eagles territory after two rushes of 23 yards and 15 yards by Smothers along with an 18 yard pass saw the Bears at the 5 yard line. GSU defense stepped up on the third and goal and forced a fourth down. UCA went for it on fourth down and once again the Eagle defense denied the Bears of a touchdown stopping the drive at the two yard line for a turnover.

Deep in their own territory and facing a third and seven at their own five yard line Mckinnon found a streaking Zach Walker for a 47 yard pass completition and into UCA territory. The Eagles touchdown from McKinnon to Robinson was erased after an Illegal formation penalty was called against GSU. The drive stalled and GSU was forced to kick a 40 yard field goal to extend the lead to 24-6.

UCA began to drive with under a minute left in the half after starting at their own 45 yard line. A pass interference in the endzone gave the Bears the ball at the GSU 13 yard line with less than ten seconds remaining. UCA took advantage and kicked a 30 yard field goal as time expired to cut the lead to 24-9.

GSU opened the second round of the FCS Playoffs against University of Central Arkansas by differing the coin toss to the second half. Coach Monken’s faith in the defense paid off as The Eagles defense stepped up on the first possession with a quick three and out. On the punt GSU special teams brought pressure and forced the punter to only kick a punt of 10 yards.

The short punt was for not as the Eagles were stopped short after attempting to convert a 4th and 3 on the Bears 30 yard line and turned the ball over on downs.

Again GSU denied Central Arkansas of a first down and for the second straight time the Bears went three and out after a big third down stop by linebacker John Stevenson.

GSU drew first blood with 9:32 left to go in the first quarter after Jerick McKinnon went 57 yards for a touchdown to put the Eagles up 7-0.

UCA looked to respond, moving the ball quickly with the help of a personal foul on the GSU defense and a 30 yard pass completion from quarterback Wynrick Smothers. However their bid for a touchdown was cut short after the drive stalled and the Bears were forced to a kick a 34 yard field goal with 7:30 left in the opening quarter.

GSU started their next drive on their own 45 yard line after a big return by J.J Wilcox. The Eagles took advantage of that field position and capitalized after a 5 play, 55 yard drive ended with a 32 yard touchdown pass from Jerick McKinnon to Darreion Robinson.

GSU pinned UCA deep right from the kickoff with the drive starting at the Bears own 7 yard line. After consecutive passes moved gained a total of 55 yard the Bears were on the edge of the redzone. GSU’s bend but dont break defense came through once again forcing CAU to kick a 42 yard fieldgoal.