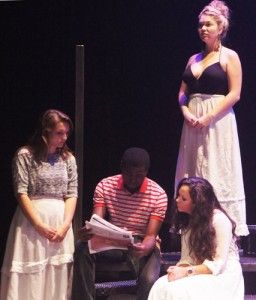 Photo by: Chad KenneyActors go over lines for the fall's production of "Triangle Factory Fire Project". Auditions for spring shows are Dec. 5 and 6.

Georgia Southern University students will be able to audition for this spring’s main stage shows, “Death of a Salesman” and “On the Razzle” Dec. 5 and 6.

The auditions are open to anyone in community and interested participants can sign up for a set time at the box office of the Center for Art and Theatre.

The auditions will be cold readings and each auditionee will be given material at the audition and five to ten minutes to prepare before they perform. All auditioners are encouraged to familiarize themselves with the plays,and anyone auditioning for “On the Razzle” will be asked to tell a joke or do a piece of physical comedy.

“We have such a strong group of people that are involved with theater, and they are not all majors. I know I am going to have hard choices,” professor Lisa Abbott, director for “Death of a Salesman” and theatre professor, said.

Professor James Harbour, who is retiring from Georgia Southern University after the summer semester, will direct “On the Razzle” and will perform the lead role of Willy Loman in “Death of a Salesman,” Abbott said.

“(Willy Loman is) one of the iconic roles of the American theater,” Harbour said.

“It’s always wonderful to have a professional actor in the cast; the students learn so much from watching how he works. Also I think with Willy Loman, having someone who is actually the age of the character adds weight to the story,” Abbott said.

Positions are open to all majors and the casting will be based on acting ability, not personal characteristics, Abbott said.

“We cast for who is the best for the role at the audition, so in ‘Death of a Salesman’ we may have a multi-ethnic family,” Abbott said.

They will be looking to cast funny people for “On The Razzle,” Harbour said. “It’s a farce, really fast paced comic farce.”

“We may have freshmen I have never seen before come in and blow me away at the audition, and they will end up in the lead role,” Abbott said.

Students wishing to know more about the audition process can contact Abbot or Harbour through email and are encouraged to attend Theater South meetings held on Tuesdays at 5:30 inside the CAT, Abbott said.

“An important thing to remember is that even if you don’t get cast, and it’s a pretty sizable cast. We have other events coming up in the spring,” Abbott said.

Abbott said, those events include a ten-minute play festival and “The Little Prince” among other events that will happen next semester.