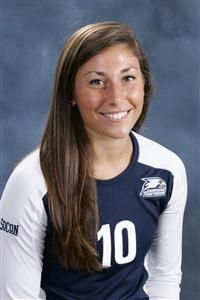 Bellissimo is the 11th Academic All-America selection from GSU and the fourth Eagle to earn first-team honors.

The senior is an nutrition major with a 4.0 grade point average. She helped lead the team to a 25-7 record and the Southern Conference South Division regular-season title.

As a three time member of the SoCon Academic Honor Roll and two-time SoCon All-Academic selection, Bellissimo was the 2012 GSU female Scholar Athlete of the Year. She also currently serves as president of the GSU Student-Athlete Advisory Board.