GSU to face off against BPC Saturday 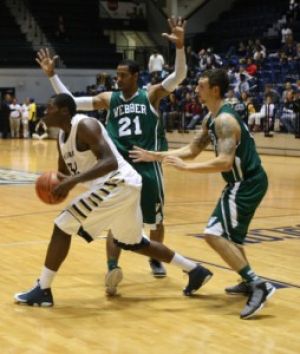 Saturday will be the last home game for the Georgia Southern University’s men’s basketball team (2-5) before winter break against Brewton-Parker College (1-9) at 7 p.m. in the Hanner Fieldhouse.

The Eagles are coming off of three straight losses, and two very close games at that. Although the Eagles have not been winning games recently, they have been improving every game and are continuing to gain a rhythm on the court.

The Barons, on the other hand, have been struggling almost the entire season. They are coming off of eight straight losses and haven’t had a win since Nov. 3 against Martin Methodist College.

In this game, it could be a battle of which team gains the most points unless a team’s defense really steps up. Leading the Eagles is junior forward Eric Ferguson with 108 points already this season, averaging 15.4 points a game. For the Barons, sophomore guard Warren LeBeauf is leading his team with 133 points, averaging 13.3 points a game.

Ferguson has been leading the Eagles in their offensive play, but the defense will need to really improve if they want to win. The Eagles’ focus this game needs to be reducing the amount of turnovers, and especially the amount of points the opponent receives due to the turnovers made. BPC is very weak from behind the arc with a shooting percentage average of .264, so the Eagles need to defend the basket and push the Barons to shoot along the outside.

The Eagles have had a week off to gain back momentum and to really gain a team perspective on the way they have been playing the last few games. After the loss against Elon University, GSU fell into a bad slump on the court and really needed this week to find its flow again and start playing the way that will get it another conference championship.

This game will be the last home game for the Eagles until Dec. 29 when they will return home to play Georgia State University.