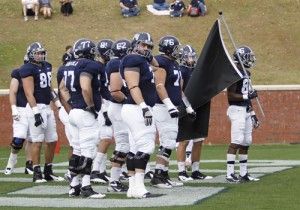 Photo by: Lindsay HartmannGSU Eagles get ready to dominate the field before the beginning of the game against University of Central Arkansas this past Saturday. GSU will play Old Dominion on Dec. 8 for their next game in the playoffs.

In fact there is so much buzz about this matchup between the No. 4 ODU and No. 5 GSU that ESPN has decided to broadcast this game at noon this Saturday on their flagship station.

ODU is hosting this matchup at home in Norfolk, Va. where they have won the last three (6-1) including last weeks second round game against Coastal Carolina University by a score of 63-35.

GSU will make the nine-hour trip to take on ODU after defeating University of Central Arkansas 24-16 at home in a defensive struggle towards the end of the game.

Both teams played against each other in the 2011 second round of the Football Championship Subdivision playoffs with GSU winning at home by a tally of 55-48.

This year the Monarchs look to flip the script on the Eagles as they come in as the favorites and are led by sophomore quarterback Taylor Heinicke.

In last year’s game Heinicke as a freshman performed well against GSU’s defense throwing for almost 350 yards on the ground and five touchdowns.

Players to watch for on ODU

Sophomore quarterback Heinicke is a Walter Payton award finalist (best player at the FCS level), he has thrown for 4,655 yards and 41 touchdowns while adding 10 scores on the ground. Heinicke also broke the NCAA Division One record for most yards thrown for in a game (730).

Redshirt senior wide receiver Nick Mayers has been Heinicke’s favorite target this season as he leads the team in catches (69), yards (1,083) and touchdowns (14). He is coming off a 103, one touchdown performance against CCU.

Redshirt sophomore wide receiver Larry Pinkard is the second part of the ODU receiver tandem. He has caught 48 passes for 747 yards and had seven scores this year. Pinkard had a breakout game last week racking up 154 yards and three touchdowns.

Players to watch for on GSU

Junior quarterback Jerick McKinnon is the team’s leading rusher with 1,478 yards on the ground and 15 touchdowns. He also has 491 yards through the air and six touchdowns. McKinnon is also coming off of a 316 yard rushing performance in his last game.

Senior safety J.J. Wilcox has been a dynamic player returning kicks and also making plays on defense. He has tallied 79 tackles on the season and is coming off of a seven-tackle performance. Wilcox was also just invited to participate in the Senior Bowl.

Senior linebacker John Stevenson is closing in on 100 tackles on the year. Right now he leads the team with 98 tackles.

Matchup to watch for

Whichever team can establish their strength of offense will be at a significant advantage.

The game kicks off at noon at S.B. Ballard Stadium in Norfolk, Va.