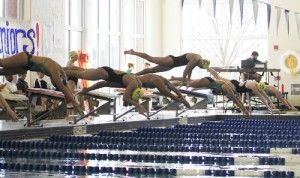 “I am very proud of how Elaina, Abbie, Kristen and Courtney performed at Winter Nationals against some of the best national and international competition,” head coach Nathan Kellogg said in a press release.

“Everyone went at least one season-best time, and that was our goal coming in, so it was a tremendous experience for us,” Kellogg said.

This weekend’s meet was unique in that it is open to anyone who met the qualifying time standards. Competitors included high school students, club team members and representatives of many colleges.

The Eagles now have a month off and will hit the pool again on Jan. 5 with a full squad to start the spring portion of their schedule. They will travel to Fort Myers, Fla. to face conference foes Florida Gulf Coast University and Liberty University.