Emotions fly in the closing moments 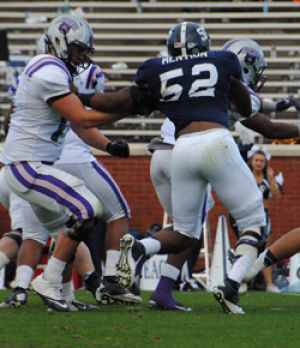 Things got a bit chippy at the end of what was all but in the books, of Georgia Southern’s 24-16 victory over the University of Central Arkansas.

The closing minutes saw a forced fumble recovered by GSU with 2:08 left in the game. In order to be safe, GSU ran out the rest of the clock to prevent UCA from having another chance to score and bring the game closer.

On the second kneel down, junior quarterback Jerick McKinnon dropped back and waited for a defender make an attempt to tackle him. McKinnon quickly knelt down and was hit soon after by a UCA defender. Tempers flaired as some of the GSU linemen, protecting their quarterback, got in the defenders face and voiced their displeasure.

On the next and final play of the game, the UCA individual was met once again by disgruntled and unhappy GSU players, who believed that McKinnon got a “cheap shot”.

This is a very fitting way to the end of a game like this because it showed the raw emotion and toughness of this game.