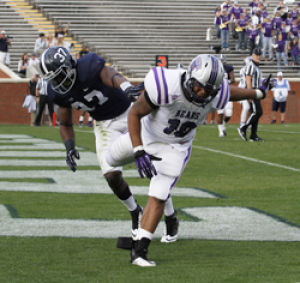 Georgia Southern University came into second round of the playoffs against the University of Central Arkansas on Saturday as the underdog but instead had a decisive 24-16 victory.

The Eagles started the game strong, scoring two touchdowns in the first quarter, one a 57 yard touchdown run by junior quarterback Jerick McKinnon and the second a 32 yard pass from McKinnon to senior slot back Darreion Robinson.

GSU’s defense held the Bear’s passing offense in check in the first half to three field goals and took a commanding 24-9 lead into the break.

The second half was a different story as the last 30 minutes of the game saw GSU draw blank on the scoreboard. However, the Eagle defense was able to hold UCA to only a touchdown for the remainder of the game.

“You get your back to the wall, and there’s only one direction you go and one way to do it, you’ve got to fight, and I think that’s what happens, you get a sense of urgency once you get close to our end zone, and we’re gonna[sic] step up,” senior defensive lineman Brent Russell said.

The game was put out of reach after UCA was driving down the field late in the fourth quarter until they turned the ball over via a fumble with 2:08 left in the game.

“I’m so impressed with these kids, the whole team and just how much they care about each other and how well they play together, how unselfish they are,” head coach Jeff Monken said.

GSU is no stranger to grinding up yards on the ground, and in fact coming into this game the Eagles were averaging almost 400 yards a game.  This game they accumulated 404 yards rushing. What is more impressive is that 316 of that 404 came from the legs of McKinnon.

With McKinnon’s performance he now holds the record for most rush yards by a quarterback in GSU history. He also is now second all-time for rushing yards in a single game by a GSU player.

The Eagles will travel to take on the Old Dominion University in Norfolk, Va. The game will be aired on ESPN at noon.