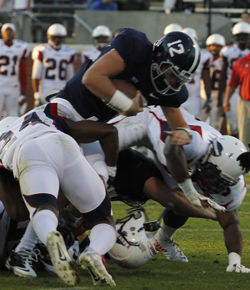 Photo by: Lindsay HartmannSenior quarterback Russell Demasi scores from two yards out during the 69-26 Eagle victory over Howard University. This was his first touchdown of the year.

Homecoming and Senior day was a memorable one for the 18,069 fans that watched Georgia Southern University beat Howard University by a score of 69-26 but nobody’s experience can compare to the seniors that played in this game.

In the early parts of the 4th quarter senior tight end Tyler Sumner tallied a receiving touchdown off a play action fake from Jerrick McKinnon found Sumner wide open in the end zone for a seven yard touchdown. The score was Sumner’s second touchdown reception of his career and the first one since 2009.

Later in the 4th quarter senior quarterback Russell Demasi scored a touchdown on the ground from two yards out. The former walk on scored his first touchdown since 2010 against Savannah State.

In the press conference afterwards both seniors sent their gratitude to their teammates and appreciation to be a part of the GSU program for the past four years.