Erk Russell to be honored Saturday 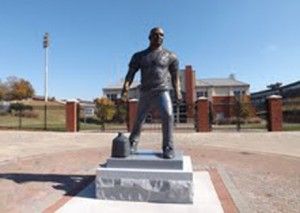 A new figure will grace the grounds of Allen E. Paulson stadium that many people claim has been a long time coming.

At 12:30 p.m. on Dec. 1, a nine-foot bronze statue of legendary football coach Erk Russell will be dedicated outside the Gene Bishop Field House, prior to kickoff of the 2012 Football Championship Subdivision playoffs against the University of Central Arkansas.

“He was such a great motivator, had a great spirit about him for football,” current head coach Jeff Monken said.

The statue features Russell wearing one a shirt that resembles both the title of the sculpture and his own personal motto, “One More Time.”

Russell first became an Eagle in 1982 and was named by the USA Today as the “Coach of the Decade” for the 1980s, and is considered by many to be the “Father of Georgia Southern Football.”

“With the whole start of the program, coming here and winning those championships, I could keep going on and on but the stories you hear about him as a recruit makes you want to come here and be a part of something special like this,” junior quarterback Jerick McKinnon said.

The statue, a product of the work put forth by the GSU Athletic Foundation, will be placed by the main gates of Paulson, a stadium where Russell won so many of the games that contributed to his 83-22-1 record.

“The statue of Coach Erk Russell is a great addition to the ‘Prettiest Little Stadium in America’ – the house that Erk built,” John Mulherin, president of the Georgia Southern University Athletic Foundation, said in a GSU Athletics press release.

When Russell first came to GSU, the football program had been non-existent for 41 years after the school went 45-67-7 from 1929 to 1941 and ceased to play football.

One of the greatest Russell moments was in 1989, when the Eagles achieved the first 15-0 season in the 20th century, culminating in a national championship win here in Statesboro.

Derek Sills and the Athletics Steering Committee led the fundraising for the statue, which will be temporarily placed by the Bishop Fieldhouse until it can be moved to the planned football operations center.

The Eagle Football Alumni Association will be selling t-shirts across the road from the statue so fans will be able to wear the same shirt and Eagle Nation can be united in staying true to the motto “One More Time.”