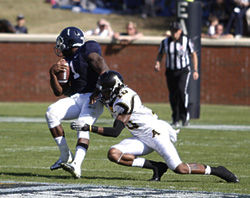 Photo by: Lindsay HartmannJunior quarterback Jerick McKinnon (1) spins around a tackle during the 31 - 28 loss to Appalachian State on Saturday.

For the first time in 14 home games, the Eagles were stunned by their biggest SoCon rival within the last 10 years, Appalachian State University.

A major problem for the Eagles that had a profound effect on the game was penalties. During the game, the Eagles were penalized eight times for 90 yards, a couple of those penalties came at very key moments in the game.

The game came down to the wire and with 1:35, the Eagles were threatening to take the lead or at least tie the game from the App. State 22 yard line. The Eagles were held to a 4th and four and instead of kicking the field goal to tie the game, Monken and his staff elected to go for it. Trey Butler actually picked up the first down but Johnathan Bryant was called for an offensive face mask, which backed the Eagles up 15 yards to the App. State 34.

The Eagles would go on to throw an interception, sealing the game for the Mountaineers. From there, fans could only guess what would have happened if that penalty didn’t happen.

Another key penalty helped set up App. State’s only touchdown of the second half. A punt from Eagle punter Luke Cherry sailed high and the helmet from an Eagle defender tipped the ball before the Mountaineer returner could touch it. As a result, the Eagles were flagged for another 15 yards and App. State was given a short field from the GSU 49-yard-line.