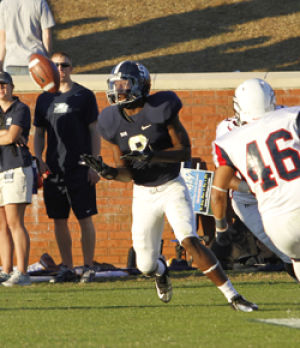 After last week’s disappointing 31-28 loss versus Appalachian State University, which included three missed field goals by the Eagles, Georgia Southern University was determined not to even bother with them on Saturday vs the Bison.

During the game the Eagle offense ran effectively scoring 10 touchdowns against Howard University.

Junior quarterback Jerick McKinnon was responsible for five touchdowns. Three of them came on the ground and two through the air. He gained 198 yards off 16 carries.

Sophomore B-back Dominique Swope was back in action today. During his limited action of just four carries, he had a massive impact on the game, scoring two touchdowns and gaining 98 yards. His most explosive play set the tone for the game, when he scored from 58 yards out on the second play of the game.

There were no need to kick field goals because the Eagles were five of five for touchdowns from inside the red zone.

Last weekend against App. State, the Eagles were held to just three of six for points scored from within the red

The Eagles also played effectively on third down, going five of eight.

Freshman kicker Alex Hanks, who missed two field goals last weekend from within 30 yards and had a third kick blocked also played better today, despite not having to attempt a field goal.

On all 10 of his extra point attempts, Hanks was nine of ten. In the one PAT attempt that got blocked, was on account of the fact that Howard was offside. The Eagles ended up going for a two point conversion so in reality, the missed PAT didn’t count because of the penalty.

The Eagles rushed for 529 yards on the day, avoiding any need to kick a field goal. This is a strategy head coach Jeff Monken will hope to employ next week against the University of Georgia in the regular season finale.