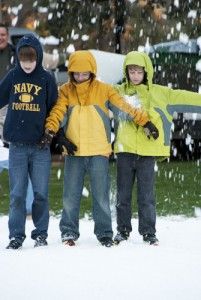 Sweetheart Circle will see its annual dusting of snow as Andy Amason, owner of Snow South, predicts around 300 tons settling around campus today.

“A six cylinder ford motor grinds ice and slings it through a propeller that shoots out onto the ground,” Amason said.

The snow machine has been included in this holiday tradition for the past couple of years, Gabrielle Gonzalez, public relations of the University Programming Board, said.

“We wanted to do things that made you think of Christmas and the holidays,” Gabrielle Soler, University Programming Board spirit and traditions chair, said.

“The snow machine was brought to the Lighting of Sweetheart circle after we thought of it for an event called ‘Snow in the Boro.’ Gabrielle (Soler) wanted to bring it to the Sweetheart circle event beginning last year,” Gonzalez said.

A tradition that started in 2007 will kick off the holiday season with the annual Lighting of Sweetheart Circle at 4 p.m. until 6 p.m. The famous snow machine will reign in the holiday season, and for the second year President Brooks Keel will light up the circle with a flip of a switch.

Pictures with Santa, cookie and ornament decorating booths and hot chocolate stands are some of the many traditions at this event that the University Programming Board puts on, Soler said.

The event will start with a performance from the Adrenaline Show Choir at 3:30 p.m., and the snow machine will kick in around 4:15 p.m., Soler said.

The president and the first lady will turn on the lights during this event that will light up the administrations buildings for the rest of the season, Memory Littles, activities coordinator for student organizations, said.

The President will ‘flip the switch’ at the beginning of the event around 4:15 p.m., Soler said.

“This is a newer tradition that brings the Georgia Southern campus and Statesboro community together for the holidays,” Littles said.

Sweetheart circle once served as the center of Georgia Southern College’s campus, and today still serves that purpose, although the campus is much bigger now.

“Sweetheart circle has been a popular site for around one hundred years,” Soler said.

Littles said, “The community absolutely loves it, and the lights will stay on for the rest of the holidays.”