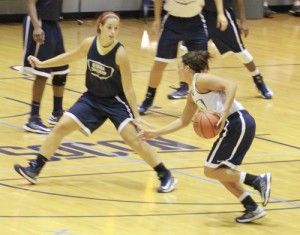 A new season means a new start as GSU looks to kick the season off right with a win in its first game. The Eagles finished last year with a record of 8-22.

Last season GSU finished tenth in the Southern Conference with a record of 3-7.  The team fell five points short of upsetting the Western Carolina University Catamounts in the SoCon tournament.

Leading GSU from the bench will be first year head coach Chris Vozab.  Last year she led the Dayton University Flyers to a 23-6 record and a NCAA tournament appearance.

A win would be a small step in helping Vozab bring a winning culture to the program.

Standing in the Eagles way will be the Owls of FAU.  Last year that team managed to go 17-13 and win a game in the Sunbelt Conference Tournament.

FAU is coming off a 100-61 victory over the Palm Beach Atlantic University Sailfish.  In their last game FAU had six players score in double figures.  GSU can’t afford to come out rusty playing against a team coming off a 39-point blowout.

GSU will charge into battle behind senior leaders Frye and guard Ronnesha Smith.  The girls will be looking to start their final season with a win.  Tomorrow night officially marks the beginning of the Vozab era.