Eagles look to soar past Crusaders 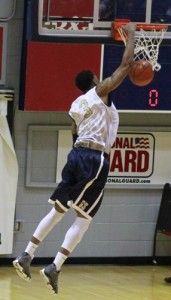 The Valparaiso University Crusaders are the first test standing in the way of the Georgia Southern University men’s basketball team’s hope to obtain a Southern Conference championship.

Tomorrow GSU will play the first game of what many deem a promising season on the Crusaders home court.  The Eagles are pegged for a good season under head coach Charlton Young. Last season the Eagles finished with a record of 15-15 (12-6 in their conference) behind then-sophomore Eric Ferguson, who averaged a team leading 15.4 points per game.

The Crusaders are coming into this game hot, winning their first two exhibition games by a combined 56 points per game, besting Saint Joseph’s College and Robert Morris University by scores of 90-62 and 92-64 respectively.

VU finished last season with a record of 22-12.

“(GSU is) definitely a program that’s on the rise,” the Crusaders head coach Bryce Drew said after the game last season.

That was last season. Now GSU has two of their top four scorers from last season returning for their junior seasons, Ferguson and Jelani Hewitt to go along with the addition of transferring senior C.J. Reed and his father, newly hired assistant coach Cliff Reed.

The Crusaders also added a transfer to bolster their roster, six foot ten inch forward Bobby Capobianco who sat out last season in accordance with NCAA transfer regulations. Capobianco averaged 20 points per game to go along with eight rebounds in the Crusaders two exhibition games.

Ferguson and Capobianco will most likely matchup against each other throughout the game. Ferguson will have to use his speed and athleticism to counter Capobianco’s size in order to dominate what will be an intriguing matchup.

The Eagles will need to play a complete 40 minutes as a team in order to beat VU. In both exhibition games the Crusaders have used big second-half scoring runs to crush their opponent and come out victorious.

GSU plays the Crusaders tomorrow at 8:30 p.m. in Valparaiso, Indiana.