Monken: I never imagined doing anything else 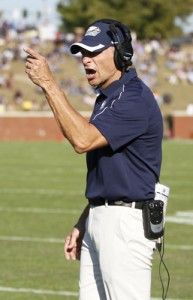 Photo by: Lindsay HartmannAs GSU head football coach, Jeff Monken has led the Eagles to a 29-10 record.The Eagles are currently 8-2 this season and will face off against UGA Saturday.

Head coach Jeff Monken is often seen as the man who helped restore Georgia Southern University football to prominence, but many people don’t know what made him the right man to do the job.

The son of a head football coach from the suburbs of Chicago, Monken was born into the game. Not only was his father a head coach, but also so were his four uncles. From there, Monken, his brother and five cousins all went on to be head football coaches too.

“I just never imagined doing anything else. I saw what a tremendous impact they had on young people and the communities where they lived, the young people that they worked with and their families. I think that’s what got all of us into coaching, certainly me,” Monken said.

Since the time he was 8 years old Monken was at the school where his dad coached, handing out water and fixing up the equipment. It comes as no surprise that his favorite football memory would be playing for his dad.

“It was just a fabulous feeling to be out there with him every day as a player, be coached by my dad and be out there on Friday nights with my dad. It was great,” Monken said.

Over the years, Monken learned a lot from his dad, not just about football but also about life.

“My dad’s emphasis was on effort, trying hard, hustling and being the best you could be,” Monken said.

“I really appreciate the fact that he instilled those values in me, and I think it helps me be a better coach. Those are the things that are important to me,” Monken said.

Monken’s parents continue be very supportive of the coaching tradition in the family. Every Friday night they go and watch Monken’s brother coach in Illinois, then drive all night and into the morning to get to the Eagle games on Saturdays. They haven’t missed any this season.

After playing wide receiver at Millikin University, Monken went on to start his college-coaching career as a running backs coach in 1997 under his mentor and former GSU head coach Paul Johnson.

During those years, everything was going good for Monken, not only on the football field, but also off it. In 2000, he met his wife Beth who has supported him along his journey.

Johnson left GSU to coach Navy in 2002 and as a member of his staff Monken went with him to coach the triple-option there. When Johnson got the head-coaching job at the Georgia Institute of Technology in 2008, Monken and his family came back to Georgia.

In 2010, Monken and his wife were happy to move back to Statesboro, a place he had created so many great memories at and where he would get his first opportunity to be a head coach, Monken said.

“She’s extremely supportive and wanted to see me have that opportunity,” Monken said.

In his free time, Monken is the ultimate family man. He has three girls who go to all the games. One is nine, one is four and the last but not least is one year old.

“I spoil them rotten, as every daddy should,” Monken said.

It doesn’t matter to Monken what he does with his girls, whether it be going to Eagle baseball games or just going out around town. Family is very important to him.

“Every moment I have, I want to spend it with my family,” Monken said. “I like doing anything I can with them. If I had a hobby I guess that’d be my hobby.”

During his tenure here at GSU, Monken has a lot of positive memories, but his favorite was beating App. State in overtime in 2010.

“We were 4-4 at the time, and I think a lot of people had counted us out. That team was such a special team. We needed something to happen for us to show those guys that all the effort we were putting in was going to make a difference,” Monken said.

Monken and his staff must be doing something right because since then, the Eagles have been the favorites to win the SoCon each year.

“We’ve got a great staff. It’s the best coaching staff I’ve ever been a part of. Our coaches genuinely like each other, enjoy coming to work together and spending time together.” Monken said. “Not only are they good football coaches, but they care about these kids and put them first.”