Feathers and fur to battle between the hedges 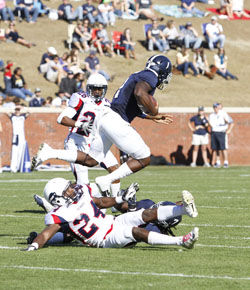 Photo by: Lindsay HartmannJunior quarterback Jerick McKinnon (1) runs over Howard defender in GSU's Homecoming game. The Eagles look to use the triple option offense to their advantage against UGA.

A battle of teeth and talons is set to occur Saturday as the Georgia Southern University Eagles take on the University of Georgia Bulldogs in a game that only goes down once every four years.

GSU’s tradition of playing one FBS opponent has landed them with a date with the No. 5 ranked UGA in Athens this Saturday.

Although this game doesn’t affect either school’s records because they are in different divisions, this is a key game for the Eagles.

Last season GSU played the University of Alabama in Tuscaloosa for its FBS game of the season. The Eagles scored 21 points against the Crimson Tide defense, which was the most points scored on them all season by any team. The Eagles also managed to rack up 302 rushing yards on the Crimson Tides top ranked rush defense.

This game will be the fifth meeting of the state rivals. The last time they played was in 2008 and UGA came out on top by a score of 45-21. UGA has won every single time the schools have played, winning by a margin of around 24 points per contest.

GSU comes into the game after winning its Homecoming game by a score of 69-26 against Howard University.

UGA is coming off a shutout win against conference rival Auburn University by a margin of 38-0.

UGA key players to watch for:

Junior outside linebacker Jarvis Jones is the number two overall rated player for the upcoming NFL draft. This season he leads the Bulldogs with 17 tackles for a loss, 10.5 sacks and five forced fumbles while being fourth on the team with 56 tackles.

Freshman running back Todd Gurley has racked up 973 yards on the ground with 11 touchdowns on the season. He is currently third in rushing yards all-time for a UGA freshman.

Senior wide receiver Tavarres King is leading the Bulldogs in receiving yards with 624 and receiving touchdowns with seven.

GSU key players to watch for:

Junior quarterback Jerrick McKinnon is coming off a three-rushing, two-passing touchdown performance. He leads the team in rushing with 1,053 yards and has 11 touchdowns, while throwing for 396 yards and five scores.

Sophomore B-back Dominique Swope saw his first action in last week’s game in two weeks after a concussion sidelined him with a four carry, 98 yards and two-touchdown performance. Swope has scored 14 times on the ground this year, which is best on the team and has 827 yards rushing this year.

Senior safety J.J. Wilcox is second on the team with 63 tackles and has recorded one interception.

The game will kick off Saturday between the hedges at 1:30 p.m. in Athens.