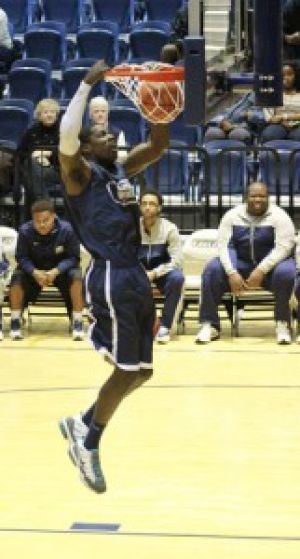 The players of the Georgia Southern University basketball teams seemed to turn into unleashed monsters as they created havoc in Hanner Fieldhouse in front of a less than enthusiastic crowd.

Both the women and men’s teams opened up to fans for the beginning of the 2012-2013 season with fun and festivities at Hanner Havoc Tuesday night.

An electric Charlton Young, head coach of the men’s team, introduced the teams as he jumped on a table to give his speech on the importance of school spirit.

There were many events at Hanner Havoc in effort to bring out support from students and faculty. Team members and students participated in a three-point contest, a dunk contest, a game of knockout, a costume contest and GSU men’s and women’s basketball teams each held a scrimmage.

“It’s beautiful to have everybody out,” Young said addressing fans before the team scrimmaged.

The men’s scrimmage was more of a prelude to the dunk contest than it was a scrimmage, getting fans excited by turning the game into a dunk fest.

The Lady Eagles scrimmage was blue vs. white, with the blue team coming out victorious, 10-8. They showed their sharpshooting ability during the game and the three point contest.

“It’s definitely important to me to see all these people come out for Hanner Havoc to get excited about the season,” senior guard Meredith Frye said.

GSU women’s head coach Chris Vozab said she wants all of GSU to be out there when they begin the season.

“There’s no better time than now to be an Eagle,” Vozab said.

Ferguson finished off a great night at Hanner Havoc with a 360-degree spin dunk that inevitably won him the dunk contest.

“I kind of knew I was going to win it. It was fun, a great experience for the fans,” Ferguson said.

Prizes were given out to the winners and participants. Fans were given the chance to get autographs and posters signed by the GSU teams.