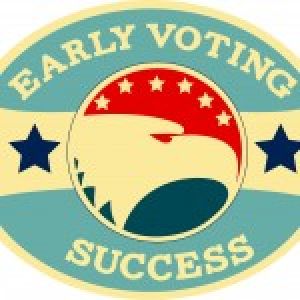 Getting a voting precinct on campus has been in the works for almost two years, and last week’s “resounding success” should keep the station on campus for future elections, Senior Second Vice Chair of the College Republicans Aron Randall said.

“There was no middle ground, so this was either going to be a great success or a complete and total disaster,” Randall said. “If we had only 500 people vote, then we would never have seen this precinct again. It would have been gone. It had to be a success.”

Provost Dr. Jean Bartels from the Office of the Provost and Vice President for Academic Affairs said she was pleased with number of people who voted.

“I am so proud of the students for fighting to organize that. I am so pleased with the city and county to grant permission for the very first time for voting to take place on campus,” Bartels said.

The university will be supporting efforts to keep the precinct, Bartels said.

“It really is up to the voting commission to determine whether this works well. They have the final say, but given how well this performed I think they will be hard-pressed to not allow it to happen again,” Bartels said.

“In order for us to continue having this precinct we needed a high turnout,” Silver said. “I would say it was very successful, and next election year we should still have the precinct.”

“It was a resounding success, and I’m proud of all the students who came out to do it and the university for making it all possible,” Randall said.

The precinct was approved in September by The Federal Department of Justice and is the first on-campus voting precinct in Georgia.

Randall said several other universities and colleges, such as the University of Georgia, have tried to get a voting precinct on their campus but haven’t had any success.

“There’s a trend in counties with colleges and universities to discourage students from getting involved in politics, but you have to look at it from the county’s perspective,” Randall said.

“There are three times as many students as there are adult residences in Statesboro who aren’t students,” Randall said. “Students leave after four years, so many counties don’t want students voting on issues that won’t affect them in the long run.”

1,932 people voted last week but they are hoping for more in the future, Randall said.

“We didn’t have adequate time between being approved by The Department of Justice and the deadline for voter registration for marketing,” Randall said.

Randall said, “Going forward into the next election we should have ample time to get students registered and voting.”