Father-son hoops duo comes to GSU with murky past 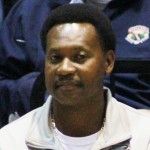 Georgia Southern University’s men’s basketball team jumps off what seems to be a promising season this Friday in Indiana with much of that promise resting on two newcomers: fifth-year senior point guard Clifford Jervon “C.J.” (24) Reed and assistant coach Clifford Reed.

“C.J. Reed is just a great all-around player, and he’s a coach’s son, so he plays the game the right way,” head men’s basketball coach Charlton “C.Y.” Young said in a news release from GSU in August. “I first saw him play as a ninth-grader, and I’ve been a fan of his work ethic and the way he respects the game since. I’m honored he chose our program as the place for him to finish his career.”

The last time this father-son duo took the court together was at Bethune-Cookman University in Daytona Beach, Fla. Clifford was head basketball coach for 10 years; C.J. grabbed national attention with winning Historically Black Colleges and Universities National Player of the Year for 2010-2011.

The duo’s time at B-CU came to an end after then 20-year-old C.J. was named the suspect in an alleged sexual battery of an 18-year-old women’s basketball player at B-CU.  Clifford was subsequently terminated from B-CU for failure to assist in B-CU’s investigation of the incident, according to multiple press accounts at the time. Reed left B-CU a week after his father’s termination.

Now, GSU is taking in the B-CU castoffs after C.J. signed a scholarship agreement in August and did not play in the 2011-2012 season at University of Central Florida due to transfer guidelines.

GSU’s athletic department that issued such high praise of the duo in August now refuses to speak.

C.J. was never charged or convicted in relation to the incident. The alleged victim’s name has been redacted from public records. She told Daytona Beach police officers that she and C.J. were riding around in his Mercedes on Dec. 5, 2010 and consuming alcohol when she started to feel sick and asked to be taken home. Instead, C.J. made a phone call and preceded to pick up three males, according to a Daytona Beach police offense incident report.

From there the story unfolds in a seven-page report issued by the Daytona Beach Police Department as follows:

The victim had moved to the backseat after not feeling well, and the three new passengers began to tug and maneuver her around. She felt one of the passengers “inside of her” and was unable to fight him off.

The victim recalls moments of being taken to the men’s locker room of BCU and then her dorm room. The report was not filed until Jan. 3, 2011 because the victim had a difficult time remembering details due to alcohol impairment.

On Jan. 6, 2011 a Daytona Beach police officer made follow up contact with the unidentified victim at which point he asked her if she wished to proceed with investigating the sexual battery. She told him no.

Before the investigation was terminated, Daytona Beach police officers made contact with the victim’s roommate and other person’s in the victim’s life whose names have been redacted. The other persons contacted gave different accounts that did not match the victim’s original story. She later admitted to officers that she was involved in a sexual relationship with C.J. and other unnamed males that she had earlier denied to police.

According the termination letter obtained by Daytona Beach News-Journal,

Clifford was terminated from his position at BCU on June 27, 2011 due to his “failure to cooperate and insubordination with respect to the University’s investigation into allegations against the University and its men’s basketball program.”

In September of 2011, Clifford filed a complaint against BCU saying that they had defamed his character, and he was unable to find a comparable job. Clifford sued the school desiring the reinstatement of his job and compensation, according to an article by the Daytona Beach News-Journal.

GSU’s athletic department refused to comment on the subject other than two statements issued by Assistant Director of GSU Athletics Media Relations A.J. Henderson via email:

“Georgia Southern Men’s Basketball and the Athletics Department went through all university procedures in the hiring of Cliff Reed as an assistant men’s basketball coach in June of this year.” “C.J. Reed enrolled at Georgia Southern in August, transferring from UCF after that program received NCAA sanctions. As one of the seniors, he was permitted to transfer and eligible to compete immediately at a new institution.”

Henderson refused to explain why the department declined to speak. Click here for the audio of that refusal.

An interview with Young for Oct. 26 was scheduled and then cancelled by Henderson. The reporter was denied access to all other men’s basketball coaches and players by Henderson due to a GSU men’s basketball policy that states that only Young can speak to reporters. This is to ensure that the team has “one voice,” Henderson said.

The Reeds at GSU

Dean of Students Patrice Jackson said she has no knowledge of the past incident and was not part of the decision making process that brought the Reeds to GSU.

Jackson said she currently has no concerns for how crowds at away games may react to the Reeds after the high profile media coverage of the incident in 2011.

“I don’t have any concern for that right now because I don’t know, but I think in any sport a good athlete is prepared, a good coach is prepared to handle heckling or anything that might happen. That happens in any strong competition regardless of the circumstances. It’s part of the package sometimes in certain communities.”

While at B-CU the Reed duo helped the Tigers win its first regular season Mid-Eastern Athletic Conference (MEAC) Championship during the 2010-2011 season. That same year, Coach Reed was awarded MEAC Coach of the Year.

C.J. averaged 18.8 points per game at B-CU. He finished his career as the Tigers’ all-time assists leader, earning All-MEAC recognition each of his three years as a Tiger.

The victim’s lawyer William Wolk could not be reached for comment after multiple phone calls over a weeklong period.

Shakeem Holloway contributed to this article.

All redactions in this incident report done by Daytona Beach police.