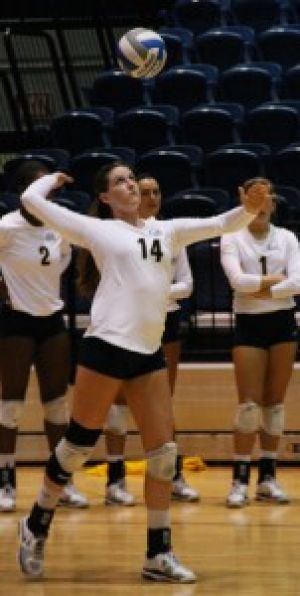 Junior outside hitter for the Georgia Southern University volleyball team Nicole Jeschelnik added six kills and six digs in this Saturday’s victory over Western Carolina University, and this year alone she has racked up 136 kills, 198 digs and 16 assists for the Eagles.

As a previous soccer player, volleyball was something new and challenging that she decided to take on. Troy Tanner, the Olympic volleyball coach for Misty May-Treanor and Kerri Walsh, encouraged her to take on the sport of volleyball. Tanner convinced Jeschelnik that her height and her particular qualities made her an outstanding potential volleyball player.

“When I came to Georgia Southern, I was what you considered a raw volleyball player. I hadn’t had much experience, and I had so much room for improvement,” Jeschelnik said

“I picked Georgia Southern because I knew coach Chad would be an amazing mentor. I knew he knew what he had in mind for me and knew he was going to be able to get that out of me. He’s critiqued my passing, my hitting. Everything has just gone tenfold. He was able to turn me into a completely different player, and I am so appreciative of that,” Jeschelnik said.

Jeschelnik is positioned as an outside hitter but has contributed to the team’s numbers in many other ways. Most matches, Jeschelnik puts up impressive numbers for the offense as well as the defense.

“I love passing. That’s one of my favorite things to do, serve-receive and digging, when you can dive out for a ball, and save that point.  You know your team is counting on you to do it, and your team believes you can get it, and when you actually get it up, and your team can score the point, it’s a really good feeling that you can help out your team,” Jeschelnik said.

“In the match against Samford, we were down 2-0, and Samford was number one in the north. We made just so many errors. We went back to the locker room and said ‘we got to pick this up, we got to do it.’ As we were walking out of the locker room, we overheard their coach kind of bad talking us, like ‘I thought they were going to be better, this is not the Georgia Southern team we thought they were.’ We chose that moment, with that comment, to prove them wrong, and from then on everything clicked and everyone was doing what they needed to do. And beating them in the fifth set 15-8 just sealed the deal,” Jeschelnik said.

GSU is on its eighth win in a row and will finish out its conference season against Furman University on Friday at 6 p.m. and Wofford University on Saturday at 7 p.m.