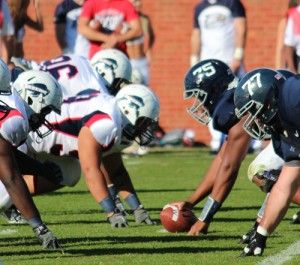 Photo by: Chase ChalkerSenior offensive lineman Blake DeBartola (77) and the rest of the Eagle offensive line up against the Howard University defense last Saturday. HU defense could not hold back the Eagles as GSU went on to score 69 points.

Scoring touchdowns was not an issue for the Georgia Southern University Eagles in their homecoming finale against the Howard University Bison this weekend.

The GUS offense found its way into the end zone 10 total times, and freshman kicker Alex Hanks converted all of the point after attempts. The only attempt the Eagles did not make was in the fourth quarter when senior quarterback Russell DeMasi attempted to run in on a two-point play.

“There were a lot of good individual plays in this game. We were running the ball well, and there were just some opportunities to get some catches,” head coach Jeff Monken said.

Sophomore running back Dominique Swope, who returned this game, helped GSU by sprinting through the end zone twice in the game. In the first half, the Eagles pulled ahead right away by scoring on the second play of their first drive. This is when Swope sprinted 58 yards to the opposing team’s goal line.

“We did a great job today; we blocked well, passed efficiently and rushed the ball well. It was just everyone playing their role and doing their part because it takes a team effort,” junior quarterback Jerick McKinnon said.

By the end of the half, the Eagles cranked out a total of six touchdowns and 336 total rushing yards.

With the scoreboard boasting a 35-13 GSU lead, the Eagle’s coaches began to pull starters and let some of the seniors get some playtime since it was senior day.

Seniors like tight end Tyler Sumner, DeMasi, running back Darreion Robinson, safety J.J. Wilcox and linebacker John Stevenson all got the opportunity to possibly play in Allen E. Paulson stadium for the last time unless the Eagles get picked for a home game in the play offs.

“It was a very emotional game. Time just flew by, and this has been a great four years here for me at Georgia Southern,” Wilcox said.

Sumner said, “It was awesome, the seniors to get a win like that, and we are just thankful for the opportunity to get to play one heck of a game next week.”

The rest of the seniors had their moment of glory before the game, as their names were all announced. Senior defensive tackle Brent Russell, who was suspended after an arrest last week, was not named and was not present on the sidelines during the game.