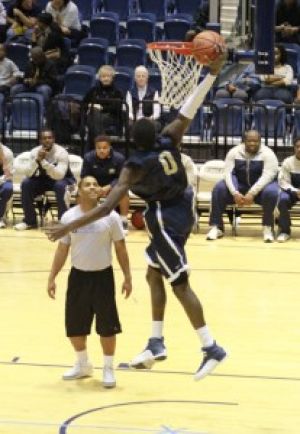 Georgia Southern University’s men’s basketball team hopes to get their first win of the season against the University of North Carolina at Charlotte 49ers tonight at 9 p.m.

GSU looks to turn their season around after suffering a loss in the season opener against Valparaiso University 85-54. The Eagles matchup against the 49ers will be televised nationally on the NBC Sports Network.

Unlike GSU, the 49ers were successful in getting a win in their season opener against the Charleston Southern University Buccaneers, beating them 68-58. The 49ers were led by sophomore guard, Terrence Williams, who posted a team leading 19 points to go along with 10 rebounds.

The Eagles are in for a tough test against the 49ers, they held the Buccaneers to 29 percent shooting from the field and scored 19 points off 12 Buccaneer turnovers.

GSU will need to settle down in their offense; they committed 21 turnovers in the opener and shot 31 percent from behind the arc. The poor three-point shooting percentage may be a result of the suspension of junior Jelani Hewitt. Hewitt led the Eagles in three-point field goal percentage last season with 39.6 percent.

It is currently unknown if Hewitt will play tonight.

However, there was a bright spot in the Eagles defeat.  Freshman Cleon Roberts stepped up in Hewitt’s absence. Roberts recorded a team-leading 18 points and two steals in the opener. Roberts’s points in the opener were the most in a career-opener at GSU since Eric Ferguson scored 26 in his first game.

If Hewitt is out again tonight, Roberts and Ferguson will have to step up to lead this team to victory. While Ferguson had 16 points and seven rebounds, he also had eight turnovers.

In order for the Eagles to win they must stop committing so many turnovers and play collectively, as they only had eight assists as a team in the opener compared to 19 for VU.