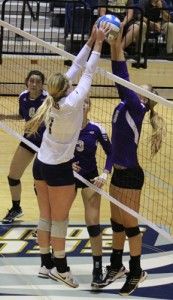 Photo by: Mark Barnes IISenior setter Kate Van Dyke (7) reaches up to block a ball against Western Carolina player during the game on Nov. 3. Many of the volleyball team members received all-conference honors today.

SoCon Coach of the Year

Head coach Chad Callihan was named the SoCon Coach of the Year.

Callihan led the Eagles to 20-plus wins for the third time in his five-year career at GSU. He now also has over 100 victories for the Eagles.

This is Callihan’s second Coach of the Year award, he won the honor in 2004 for the first time when he led Appalachian State University to a 26-8 record overall, and 15-1 in the SoCon winning the North Division title.

SoCon Player of the Year

Senior setter Kate Van Dyke was named the SoCon Player of the Year.

Van Dyke was named the SoCon Student-Athlete of the Week for the week of Sept. 26 and was named to the 2012 Preseason all-conference team. She was also named a candidate for the Senior CLASS Award and broke the GSU career assists record.

Van Dyke and senior outside hitter Meredith Paskert were named to the all-conference first team.

Van Dyke is the only player in SoCon history to be named all-conference first team four consecutive years.

Paskert was also named the Volleyball Offensive Player of the Week for week eight.

Senior outside hitter Moriah Bellissimo was named to the all-conference second-team.

Bellissimo was named SoCon Offensive Players of the Week for week 12 and was named the Capital One Academic All-District by the College Sports Information Directors of America.

Belissimo was also named the SoCon Student-Athlete of the Week for the week of Nov. 14.

Beecher aided the Eagles by adding 560 digs, averaging 4.87 digs per set. She is second at GSU in digs, followed behind Megan Lippi who posted 597 in 2003. She also tallied 102 assists and 33 services aces.

Curry has a grand total of 68 blocks, leading the team with 1.08 blocks per set. She also added 30 digs and 99 kills this season.

The Eagles have claimed the South Division SoCon title, for the third time in history, and look to grab the top spot in the SoCon Championship. GSU will face off against the University of North Carolina at Greensboro (13-5, 7-9), who is the fourth seed from the North Division in the quarterfinals on Saturday at 12:30 p.m.