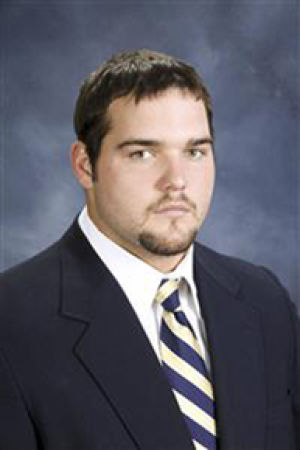 A few hours after the Eagles had a heartbreaking loss against Appalachian State University, senior defensive tackle Brent Russell (66) was arrested outside of Rude Rudy’s.

According to the incident report from Sgt. Tyrone McBride of  Georgia Southern University Department of Public Safety:

McBride arrived at the scene when a member of Statesboro Police Department requested assistance for crowd control in University Plaza’s parking lot.

As officers tried to break up the fight, individuals tried to prevent officers from obtaining the offenders. Russell refused to leave after instructed to do so by McBride.

After McBride asked him to leave multiple times and informed Russell he would be arrested if he did not comply, Russell continued to curse loudly and not comply.

McBride arrested and charged Russell with disorderly conduct and obstruction of a law enforcement officer. Russell was transported to Bulloch County Sheriff’s Office for housing and will be referred to GSU’s Office of Judicial Affairs.

No one from GSU’s Pubic Safety office was available for comment when this article was published.

Below is the incident report from GSU Public Safety