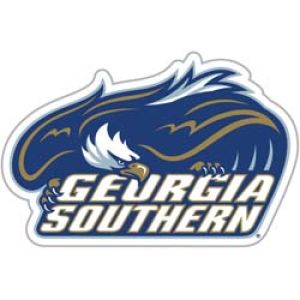 A promising season came to a heartbreaking end after the Georgia Southern University volleyball team fell to Furman University in the SoCon semifinals today.

The last time these two teams squared off, the Eagles soundly defeated Furman in straight sets. After taking the first two sets, it looked like the Eagles were well on their way to duplicating that same success in this match.

With the season on the line, Furman won sets 3-5 to complete the improbable comeback. The Eagles had no answers for senior outside hitters Chandler Ambrester (24 kills, 13 digs) and Natalie Braun (16 kills, 18 digs). They showed veteran leadership for Furman and carried their team after falling behind early.

The fourth set was critical for both teams. GSU needed to win and advance to the championship round. Furman needed to win to stay alive and seize the momentum.

The importance of the set showed on the scoreboard as it took Furman 29 points to finally win with both teams refusing to go down easily.

Furman carried that momentum into the final winner-take-all set and clinched their spot in the championship game.

Even though the season ended in disappointing fashion, the Eagles accomplished a lot during this season. Senior setter Kate Van Dyke earned the SoCon Player of the Year Award and head coach Chad Callihan was named Coach of the Year.

Fans of the Eagles also got to see the team win the South Divison title for the third time in school history and reel of an impressive 13-match win streak.