Field goals cause problems for GSU 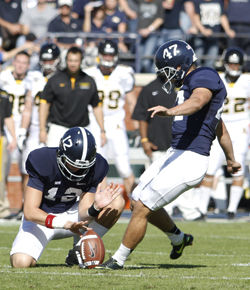 In this weekend’s loss against rival Appalachian State University, the Georgia Southern University Eagles struggled with converting field goals, which ultimately cost them the conference title.

The score between the two teams was neck and neck the entire game, but the Eagles could have been ahead nine points had they been successful with all three field goal attempts.

“I wish we would have made all three field goals,” head coach Jeff Monken said. “But I know Hanks is trying as hard as he can.”

The three field goal attempts that GSU’s freshman kicker Alex Hanks took occurred twice in the second quarter and once in the third quarter. GSU had the opportunity to tie and go into overtime in the last seconds of the game by attempting another field goal, but the Eagles did not take that chance and kept trying for a touchdown.

The first failed field goal attempt from Hanks came with 9:20 left in the second quarter. On third down, sophomore quarterback Ezayi Youyoute was able to help his team get into App. State territory on the nine yard line.

Within field goal range, the GSU coaches sent out Hanks with hopes of putting three points on the score board. The ball was spotted at the Mountaineers 16 yard line making the attempt from 26 yards out. Hank’s attempt flew wide left of the uprights and turned the ball over to App. State at their own 20 yard line.

The Eagle’s second failed field goal attempt from Hanks came at the ending seconds of the half. This time the drive ended with junior quarterback Jerick McKinnon’s rush to the App. State seven yard line on third down.

The ball was spotted and ready for another try at the 24 yard line. At the snap, Hanks cocked back his foot and aimed for the center of the uprights. In midair, his attempt was blocked by App. State’s junior defensive lineman Adam Scott. The deflection flew into the air and was recovered by the Mountaineers, but fortunately for the Eagles, time had expired and the half time festivities were set to begin.

The last and final chance that the Eagles got to put three points on the board was in the third quarter. With McKinnon leading the drive, he ended up losing four yards on fourth down and the kicking team prepared to trot onto the field for another field goal attempt. With the ball spotted at the App. State 20 yard line, Hanks lined up once again for his final try of the game. Unfortunately for the freshman, his last attempt flew wide right of the uprights, leaving the Eagles with 5:43 to go in the third to score.

Although the Southern Conference season is over, the Eagles still have opportunities to work on converting their field goals so next time it will not cost them the game.