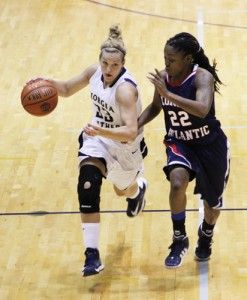 The Georgia Southern University women’s basketball team will renew a heated rivalry as it looks to cage the Davidson College Wildcats for its first conference game on the road Saturday at 4:00 p.m.

GSU laid the smack down on Kent State University to the tune of 24 points in its last game.  That game marked the first win for the Eagles under head coach Chris Vozab and pushed the team record to 1-2.

Standing across the court from the Eagles will be the DC Wildcats with a record of 1-3.  The Wildcat’s record may be misleading as two of their losses have come to national powerhouses, the North Carolina Tarheels and the Rutgers Scarlet Knights.

GSU has come out on the short end of the stick the last two times it locked horns with DC, but the last meeting was a hard fought slugfest that ended with a score of 69-62.

Leading the Eagles on the maple battleground will be team captains senior guard Meredyth Frye and junior guard Mimi DuBose.  DuBose leads the team in scoring with 13.7 points per game while Frye’s senior leadership has been crucial on the court.

Sophomore guard Anna Claire Knight has also been playing at a high level to start the season.  Knight leads the team in rebounds with 7.3 per game and is second in scoring averaging 11.7 points per game.

The Eagles will have to contain last year’s SoCon player of the year in DC’s 6’5” senior forward Sophia Aleksandravicius. Aleksandravicius’ immense size allows her to dominate both ends of the floor.

The SoCon’s defensive player of the year averaged a league leading 2.9 blocks per game last year and is currently averaging 13.5 points, 10.3 rebounds and three blocks per game.

The entire league recognizes the threat Aleksandravicius poses as she was picked to repeat as SoCon player of the year by the coaches.

GSU has a shot if the team can continue to force turnovers.  GSU has forced 20 or more turnovers in its last two games while DC averages the second most turnovers in the league with 21.3 per game.

The numbers paint a bleak picture for GSU, but none of that matters once the ball is tossed in the air.  This measuring stick game will let the Eagles know how much work lies ahead of them as the program rebuilds under Vozab.