Monken: Our focus is to beat App. State 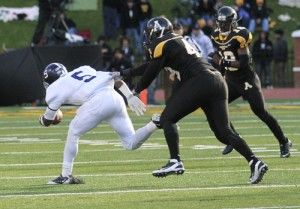 The last time Appalachian State University came to Statesboro a beast was born.

Every week it seems that Georgia Southern University has a bigger and bigger game, and this week will prove to be its biggest one yet.

“There’s so much at stake in this game for us, and I have no doubt that our guys will be ready physically and emotionally,” head coach Jeff Monken said.

This year the Eagles are hosting the Mountaineers as the top ranked football team in both the Football Championship Subdivision and the Southern Conference.

This game has a similar storyline as the time App. State last appeared at Allen E. Paulson stadium in November 2010. The Mountaineers were coming into the game ranked No. 1 and GSU was considered the underdog.

Going into that game, GSU and the SoCon had all gotten used to the Mountaineers imposing their will on the rest of the conference. After all, App. State was not far removed from winning three consecutive national championships from 2005-2007.

During the game in 2010, App. State jumped out to an early 14-0 lead, and many Eagle fans were discouraged. Instead of giving up, the beast at the very core of the Eagles awoke, and GSU held App. State out of the end zone for the rest of the game while battling back to bring the game to overtime.

The Eagles ended up getting the first possession of that overtime and scoring. To finish the game, the GSU defense stuffed the Mountaineers, shortly before Eagle Nation stormed the field amidst the chaos of celebration.

From then on, GSU has been on a tear, and within the last two years has the most wins in the conference.

This year, the Mountaineers will be coming to face a different team, a stronger one. After beating the University of Chattanooga at Tennessee in triple-overtime last week, GSU was named No. 1 in the FCS.

This week, the Eagles will have the chance to take the SoCon title, and App. State will be motivated to spoil its rival’s plans while also knocking off the top team in the FCS.

Monken said, “Our sole focus is trying to beat Appalachian State. That’s number one for us right now, and we’ve got to put all our effort and all our focus on that. They’re going to be as challenging a football team as we’ve had to play all year long.”