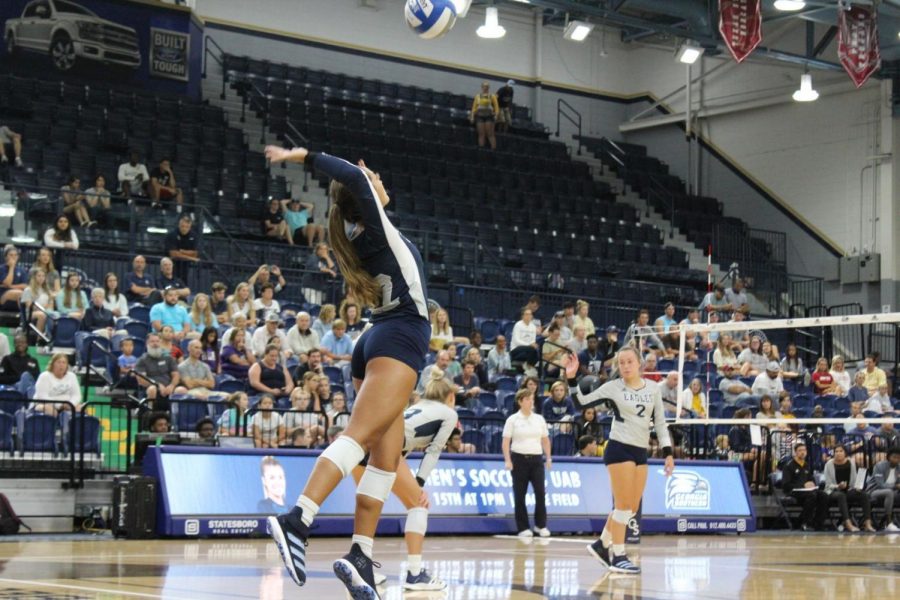 Junior libero Landon Jones has seen action in all 13 matches.

The advantage of Savannah grown talent is certainly no stranger to Georgia Southern Athletics, and junior libero Landon Jones is no exception for Eagle volleyball.

Jones, the daughter of a former Georgia College and State basketball player, high school coach, and cousin of ex-football player Tyler Summer, feels sports has always been a cornerstone of her upbringing.

She began playing volleyball at age nine, and upon playing her first tournament that year, she fell in love with the sport. She said that family meant she “grew up in the gym” and that her upbringing made a full time commitment to the game second nature.

After earning her degree in exercise science, Jones hopes to enter school to become a Physician Assistant, potentially helping young athletes with diagnosis and recovery.

Although she couldn’t enter nursing because of the time commitment that comes along with playing Division I volleyball, she still understands the opportunity to enter medicine is still in reach.

“I’ve always just wanted to do that,” she said. “I think the body’s a really interesting thing, and I feel like I can still be involved in athletics. With my high school we had a PA that would come around like once a week or twice a week, and so I thought that would be cool to be able to do that.”

Jones’ decision to attend GS was a no brainer for the 2017 Savannah Christian grad. After a dominant high school career that included three All-State nominations, three Area Player of the Year awards, and school records for kills, digs, and aces, she committed quickly.

After playing significantly her freshman year and more sparingly her sophomore, Jones has taken advantage of Coach Chad Willis’ new culture and program to lead and maximize her reps.

“The culture has changed,” she said. “I wouldn’t really say that was there last year. These coaches are not about that. We have team meetings every Wednesday night.”

Personally, Jones has taken advantage of this staff’s emphasis and willingness to allow players to take extra time in preparation to improve her craft and increase her confidence.

“[I’m taking] a lot of extra reps. That wasn’t really something that the coaches last year offered, but that’s one thing I do continuously that helps mentally and obviously physically.”