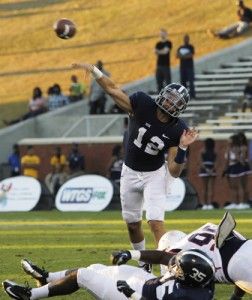 Photo by: Lindsay HartmannSenior Russel DeMasi quarterback (12) threw his first touchdown pass since 2010 during the Eagle victory on Saturday.

Georgia Southern University (8-2) capped an end to the weeklong homecoming festivities with a 69-26 rout over Howard University (6-4) that saw the Eagle offense take front stage.

The game was an offense-oriented game as both teams combined for almost 50 first downs and over 1,000 yards of total offense.

GSU racked up 597 yards with 529 coming on the ground. Junior quarterback Jerrick McKinnon led the offense in rushing with career-high 198 yards on 16 attempts.  He also ran for three touchdowns and scored two touchdowns through the air. McKinnon also eclipsed the 1,000 rushing mark on the season.

“We were running the ball and obviously when you are having success running the ball they start crowding the line and bringing the defensive backs to help out with the run. There were just some opportunities to throw the ball,” head coach Jeff Monken said.

Sophomore B-back Dominique Swope made a brief return to the field after sitting out the past two games with a concussion rushing four times for 98 yards and two scores.

Zach Walker once again made an impressive grab as he hauled in a diving catch in the end zone with 29 seconds left in the first half. Walker had 59 receiving yards on two catches with both being touchdowns.

Freshman quarterback Matt Dobson recorded his first passing touchdown of his career after completing a 29-yard touchdown pass to Zach Walker with 9:29 left in the fourth quarter.

Redshirt senior quarterback Russell Demasi also added a score of his own with 3:24 left in the game after a two-yard run found the senior in the end zone. This was Demasi’s first touchdown of the season and a fitting way to send off the senior.

“I don’t know who our most valuable player is, but I’ve got to think that he’s one of them,” Monken said. “He’s a really hard-working kid, and I’m glad that he got to score a touchdown today.”

The win puts GSU at 8-2 on the year and in a good position for the FCS playoffs. The Eagles take on in-state FBS opponent University of Georgia next week in Athens for a matchup that takes place once every four years.