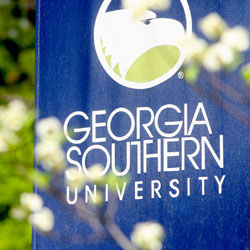 The Georgia Board of Regents gave its stamp of approval for the Football Bowl Subdivision move up as well as the stadium expansion, but the sustainability fee will have to wait for review in December.

“We are extremely grateful to the university system of Georgia and to the Board of Regents for their guidance and support during this process.  An overwhelming majority of our students voted to support these fees this fall, and we could not be more pleased with today’s approval,” President Brooks Keel said in a news release.

“I have said it before, and I’ll say it again, whether it is in the area of academics, research, sustainability, economic development or athletics, our goal is to take Georgia Southern University to the next level,” Keel said.

With the possibility of an invitation on the horizon, the submission process was accelerated for the FBS and expansion fees, Christian Flathman, Georgia Southern University assistant vice president of marketing and communication, said.

Without the expectation of an FBS invitation, the fees would not have been submitted until December, Flathman said.

“The FBS and stadium fees were submitted under a special early review this month,” Flathman said.

The FBS move-up fee won’t take affect until GSU receives and accepts an invitation from a FBS conference.  The $75 fee will be charged to students the first full semester after moving up according to a news release by GSU.

The stadium expansion fee of $25 will go into effect next fall and add 6,300 new seats to Allen E. Paulson stadium.  As soon as construction is completed, the fee would no longer be in effect, according to a news release.

The $10 sustainability fee will go before the Board of Regents through the normal procedures of submission.

“The sustainability fees have to go through the regular process in order to be approved by the Board of Regents,” Flathman said.

The regular submission process to the Georgia Board of Regents does not take place until December, and the proposal for the fee will not be reviewed until April, Flathman said.

74.4 percent of the 9,390 students who voted supported the sustainability fee, which were the most student votes for any of the three fees.

The Georgia Board of Regents approved diverting $15 of the $150 athletic fee that is already in place to build a Football Operations Center, according to a news release by GSU.

David Smith, senior sports management major said, “The expansion of the stadium gives alumni and future alumni something to look forward to and a reason to come back to the university.”