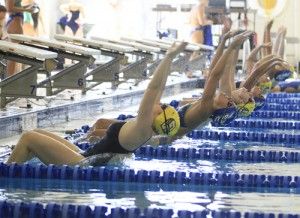 The Georgia Southern University swimming and diving team is sending four Eagles to swim at the highly competitive AT&T Winter Nationals at the University of Texas today.

The meet starts today and runs through Dec. 1.

“We are extremely excited to take Kristen, Courtney, Elaina and Abbie to Winter Nationals. They have a tremendous opportunity to represent Georgia Southern University at the national level and will be exposed to some of the best swimmers in the world,” head coach Nathan Kellogg said in a press release.

Not only does the quartet have the opportunity to compete in a national-level short-course meet against other college standouts, they will also run into Olympic gold medalist swimmers such as Ryan Lochte, Missy Franklin, Kate Ledecky and Nathan Adrian.

Lanson has set three GSU records in the 100 Free, 400 Medley Relay and the 400 Free Relay. She also received the swimming and diving team’s “Most Valuable” award for the 2011-2012 season.

Harrison was the CCSA Champion in the 200 Breaststroke in 2012, posting a new GSU record in the process. She received the swimming and diving team’s “Most Dedicated” award for the 2011-2012 season.

After this event, the Eagles will hit the pool on Jan. 5 with a full squad to start the spring portion of their schedule. They will travel to Fort Myers, Fla. to face conference foes Florida Gulf Coast and Liberty.