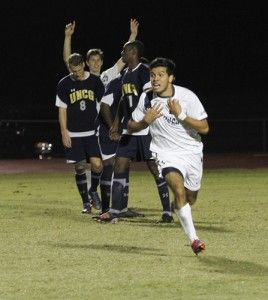 Photo by: Lindsay HartmannSophomore midfielder David Vargas Masis (11) celebrates after scoring the winning goal in the second overtime during the game against UNCG. Eagles defeated UNCG 2-1 and will play their next playoff game on Thursday against No. 1 Elon.

After falling behind early, the Georgia Southern University men’s soccer team rallied to defeat the University of North Carolina at Greensboro Spartans 2-1 in double-overtime.

The Eagles entered this Southern Conference quarterfinal matchup as the fourth-seed and was rewarded with a home playoff game against the fifth-seeded Spartans. The game was delayed for two hours due to lightning strikes in the surrounding area, but the drama on the field made up for any inclement weather.

The first half started with three shot attempts from GSU but two were blocked and one sailed wide. UNCG responded with two shots, one of which was blocked and the other saved by junior goalkeeper Neal Bates.

In the 25th minute, UNCG struck first with a goal from freshman midfielder Lukas Zarges with an assist from junior midfielder Maximilian Schulz. UNCG would take that 1-0 lead into halftime.

During the second half, freshman defender Reed Norton was a one-man assault with five shots on goal himself. UNCG redshirt sophomore goalkeeper Peyton Ford withstood most of the pressure by making six saves.

In the 84th minute however, sophomore midfielder David Reittinger fouled Norton which earned him a yellow card and gave Norton a penalty kick. Norton made the clutch kick to finally put GSU on the board with a 1-1 score.

Bates made one more save in the 89th minute to send the game into overtime. The overtime period was uneventful with each team only able to put one shot on goal.

The second overtime began with the Eagles missing a shot wide and UNCG missing a shot high. In the 105th minute, sophomore midfielder David Vargas Masis dribbled into the box, switched to his right foot and sent the Eagles into the SoCon semifinals with a game-winning goal.

After the long weather delay, 30 combined fouls, four combined yellow cards and 105 minutes, the Eagles advanced to the semifinals.

The Eagles will meet the one-seed Elon University on Thursday, Nov. 8 at 5 p.m. All semifinal games will be played at WakeMed Soccer Park in Cary, N.C.